How to align your sales and marketing teams19 min read

It is no news to companies that alignment between marketing and sales tend to be an exception rather than the rule. However, only a few are aware of a successful arrangement could generate up to 208% more revenue. Additionally, aligned teams often see over 30% higher customer retention and sales win rates while sellers are over 60% better at closing deals.

One of the most crucial steps to aligning your marketing and sales efforts is creating a service level agreement (SLA).

Originally an SLA serves to define what a customer will receive from a service provider. However, SLAs serve internal purposes as well, and marketing and sales agreements are among the most critical.
Having SLAs in place between marketing and sales assure alignment of revenue-driving goals and secure that the two teams pull in the same direction.
Both marketing and sales use SLAs as a commitment to support each other and hold each other accountable to specific agreed-upon expectations that align with the same goal. A classic example is when the marketing team agrees to provide the sales team with a specific number of leads while sales agree to contact the leads within a specific time frame.

Why create an SLA?

Traditionally, marketing and sales teams have been misaligned working in silos. Departmentalised incentive structures have enforced silos through separate objectives and goals. But to succeed in today’s competitive landscape, companies must ensure close collaboration between marketing and sales to reach full potential. One of the driving forces for breaking the silos is in the massive shift in how buyers buy today.

Today, buyers are more informed and they reach out to sellers much later, if at all. Today B2B buyers are approximately 80% through their purchase cycle before initial contact with a seller. This results in buyers who often already know the product specifications and the alternatives to the company’s offerings – rendering the initial sales talk obsolete. However, if the seller can track touchpoints the buyer has had with their company and which online materials they have been downloading, structuring the conversation with the buyer accordingly will make for a much more unique buying experience, thus giving sellers new tools to close a sale.

Aligning marketing and sales with an SLA

In a company, everyone needs to know what role they play to contribute to the stipulated goals. Usually, most employees know their work and how the work of their team contributes to the individual and teams goals. Though, in some cases, employees are not aware of how to support and work together with other teams in the organisation.

A study from Marketo shows this misalignment can cost 10% or more of a company’s annual revenue. However, if marketing and sales alignment are successfully implemented organisations can see up to 20% growth rates in their revenues :

With these numbers in mind, it is interesting that research suggests that only 26% of B2B businesses operate under marketing and sales SLAs. Generally speaking, the best way to ensure that marketing and sales teams complement each other and reap the associated rewards is to implement SLAs.

Alignment is more than just an agreement

Even though an SLA will help to align marketing and sales, organisations often find themselves in a new dilemma after a few months: The teams have managed to create an agreement, but they haven’t aligned on the same end-goals and metrics.

Marketing will often use the ‘number of leads’ as their most important metric, while sales will measure ‘revenue’, but there is a significant difference in the probability of the lead to convert into a sale, making the number of leads metric less valuable than a revenue – and sometime a false metric to pursue.
Instead of marketing focusing on leads and sales focusing on revenue, both teams should focus on revenue as their main metric.

A common issue we have encountered is when marketers fail to deliver on their SLA or when they focus on the wrong leads. Referring to the aforementioned example it could be that the white paper is converting better than the demos, which could lead marketing to shift their resources into promoting the white paper as it is a quick way of hitting their isolated goal. The result is that the sales team lose all the demo requests leads, which have a higher sales converting rate compared to the white paper leads.
Consequently, what marketing would perceive as a lead optimization would be a decrease in deal size value for the sales team and the sales teams would have a harder time meeting their sales quotas. A false KPI ends up punishing the bottomline.

Aligning properly can result in fewer but higher quality leads being handed over from marketing to sales. Exactly for that reason revenue should be the top metric both teams focus on. 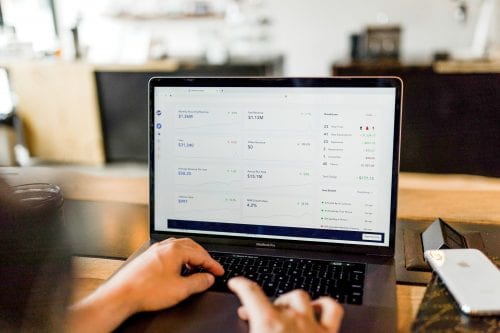 When a prospect visits a website and downloads a white paper or when she requests a demo, each action will generally count as a lead from a marketing perspective. However, the demo-request is more likely to convert into a sale as it is further in the buying process, making it a better lead for sales and higher probability for revenue creation.

How to implement an SLA 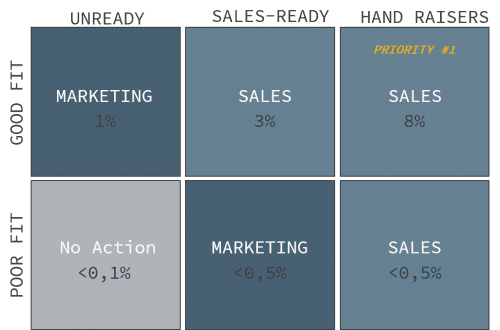 The next step is to align the marketing activities to the sales team’s resources. If a company’s marketing efforts run smoothly, it would be possible to increase or decrease the leads generation by adding or removing spend in the campaigns. However, the sales team will usually only be able to contact a certain number of leads every day. If marketing chooses to initiate a strong push in the market, the sellers might not be capable of contacting the number of incoming leads, which eventually results in lost opportunities. It is usually not an issue with smaller marketing and sales teams, but when an organisation grows it is vital to have much more precise marketing engines to stick the incoming leads to the sales team’s lead capacity.
Exhibit 2 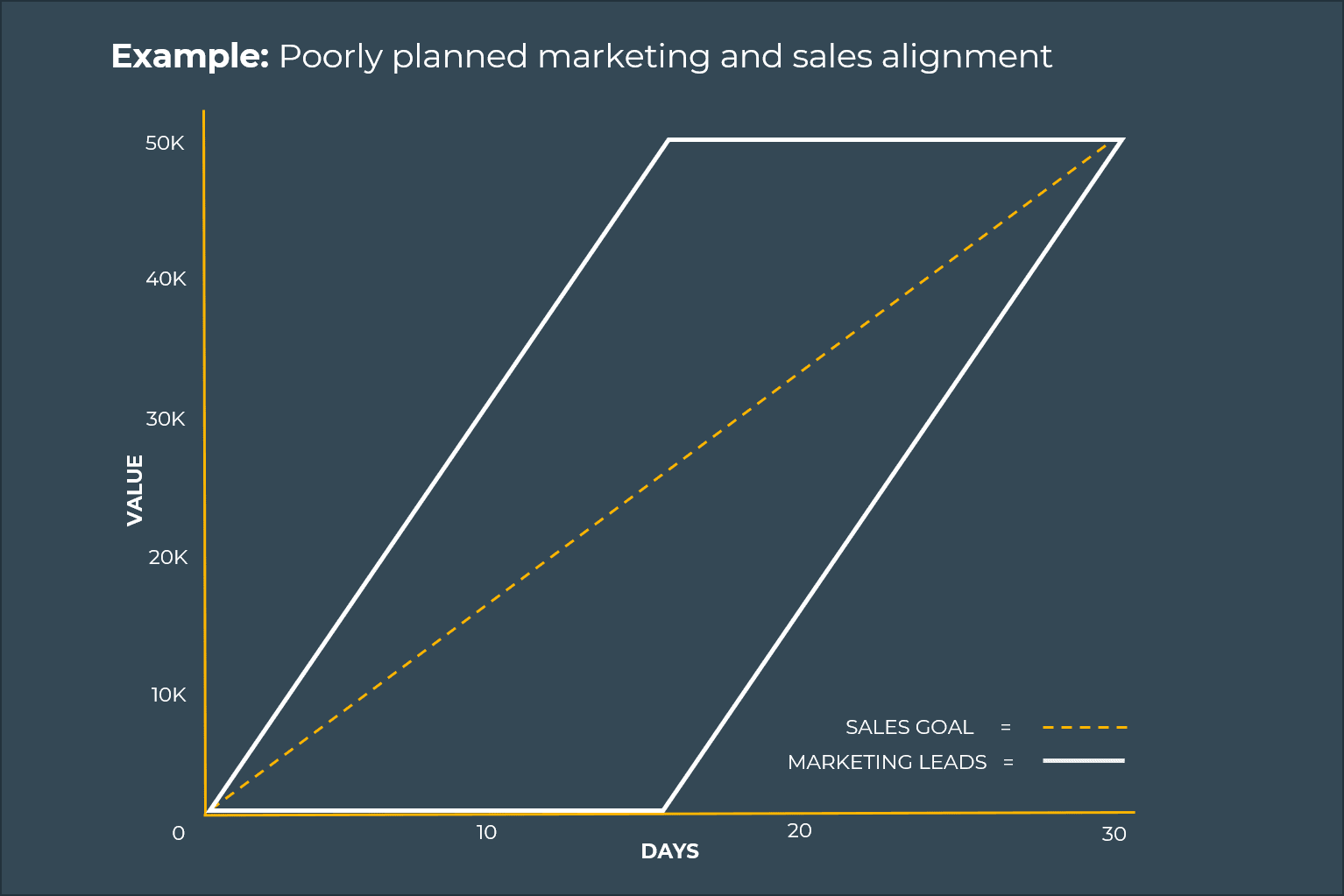 Poor marketing and sales alignment is when marketing spend time on and kicks off a great campaign halfway through the month, giving the sellers few leads to contact in the first half while being overloaded with leads in the second half of the month. As the sales team is geared for a maximum number of calls per day, some leads will not be contacted in time and eventually turn colder. Here, the lead would be lost, and the marketing spend would be wasted on a lead that was not handled soon enough.

Metrics to track for an effective SLA

Outlining these three metrics makes it possible to calculate how many marketing qualified leads the sales team needs to receive from marketing for the organisation to meet the revenue goal.

The first step in succeeding with marketing and sales alignment is to acknowledge that the two teams are dependent on each other to succeed. Ensuring they are working towards the same goal and clarifying synergies will propel this forward.

The teams should write up a simple SLA and gradually build upon it and make it fit the level of detail that both teams are satisfied with.

In order to build and sustain a healthy SLA between marketing and sales, there are some recommended actions for companies to keep in mind:

How to build a B2B customer success function

Customer Success, a function that saw it's rise within SaaS companies, is increasingly coming to more and more commercial teams. The function sits right between Sales, Marketing & the more traditional Support/Service, and can be difficult to get right. In this...

END_OF_DOCUMENT_TOKEN_TO_BE_REPLACED

If Sales Plays are so great – Why are they used by so few?